My IOD M01 design which is similar to Andy Gustafson's PAC4 but has a few modifications. My first modification was to reduce the ammount of stress points the high air pressure had to flow through after being fired. At the 2" T, I turned it at a 45 degree angle and added a 45 degree elbow to put the firing chamber parallel with the air chamber.

I also added a ball valve and air compressor hookup right above the second solenoid valve. 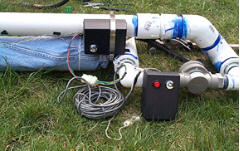 I went a little whacked out on the electrical firing system for the IOD M01. I have three rechargeable 9volt batteries which fire the solenoids when two monetary switches are pressed and the keylock switch is in the ON position. 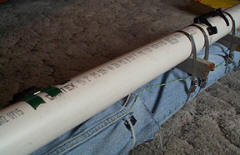 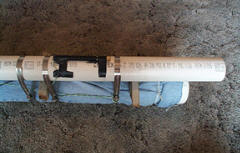 But thats just the beginning of it. The bottom switch (harder to press) triggers a 24v DPDT relay that not only activates the second switch, but also activates the 3v laser pointer attached to the cannon. When the laser dot is where you want it, you just press the second switch and KA-BLAM-O! "What there's more?" Yup, I also threw in a 25ft wired remote switch that can activate the laser and fire the cannon. Talk about the best of both worlds!

Now I do regret on skipping one of the items Andy includes on his PAC4. The item is the 1" union. In fact, before I was going to build my new IOD M02, I was going to add two unions to the IOD M01. Except I ended up blowing all the money for the IOD M01 on the new IOD M02. Oh well, I will probably fix it later ($8.00 fix). 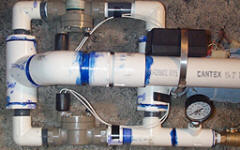 The reason for wanting the unions is the ability of making the firing mechanism square and straight. I was having so much fun glueing everything together, that I ended up glueing the 2"x1" couplers into the 2" T's before I realized what I had done. Looking at this picture you will notice what I had to do to fix it. It was not pretty and took some muscle, while at the same time hopeing the pipe wouldn't snap.

That is the complete cost for the base unit of the IOD M01 air cannon. Pricing for the electrical battery box won't be posted until I find the majority of the receipts. The sad part, is that I know the battery box w/switches cost almost half of what the base unit cost is!

The schematic's for the electrical system will be posted as soon as I figure out what I did with them. Its not too complicated though. The relay could be omitted if you get a hold of a DPDT monetary switch, but I find the relay kind of cool!